Why Modi’s Myanmar visit signals the beginning of a realignment 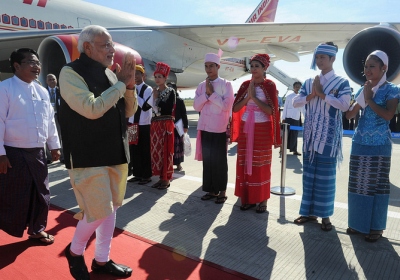 Some time in the middle of June 1950, when the sacred relics of Buddha’s two chief disciples Moggallana and Sariputta had already travelled all over Myanmar for about two months, the Cultural Studies Group of the Rangoon Ramakrishna Mission Society convened an international conference on India’s cultural and civilisational linkages with Myanmar.

But it was U Win, then Myanmar’s education minister and acting foreign minister, who articulated a new direction in his presidential address to the conference and laid down a future map for India-Myanmar relations based on civilisational linkages.

Win argued that India and Burma together formed the ‘arch of Bay of Bengal’ and that in history, despite physical barriers, both countries had succeeded in being in constant link. Discussing the cultural links between the two people, Win spoke of how the spread of Buddhist influence from India into Myanmar laid the ‘foundation of cultural association between India and Burma.’

Taking a wide tour d’horizon, Win also spoke of how Indian civilisational achievements spilled over into Myanmar and of how Indian stories and customs and laws helped shape Burmese thinking, society and culture.

In his civilisational perspective on India-Myanmar-China, Where China meets India: Burma and the New Crossroads of Asia , historian Thant Myint-U, pointing at this civilisational spill-over, notes, for example, that even though Myanmar had close links with China quite early, it was the ‘knowledge of India that would quicken and transform Burmese civilisation.’

“India’s ‘vibrant eastern ports’ were ‘a quick and simple sail away’. And it was from these ports, in Bengal, Orissa and the Coromandel Coast, that new ideas and innovations, from mathematics and astronomy to notions of kingship to Buddhism itself were eagerly imported,” he said.

It is interesting to note — especially against the backdrop of current discussions on how crucial India’s relation with Myanmar can be in terms of developing linkages in her Northeast — that Win spoke of how India’s outlying regions too had always had an intimate link with Myanmar.

Speaking for the need to revive and restructure and ‘greatly extend’ these overland contacts and links, Win described the long aim of these two countries and their people; it is a perspective that continues to act as a signpost for present geo-political realignments and efforts.

“We know each other as few people do. Our understanding of each other’s needs and difficulties is very profound and deep-rooted. With such knowledge and understanding, sympathy is not difficult of cultivation. In the New Asia, India and Burma are going to play very important parts…Owing to her deep understanding of India through long association and her racial affinity with the people of South-East Asia, Burma is in an ideal position as a bridge between India and South-East Asian countries if India is to take prominent part in the affairs of South East Asia,” he said.

Prime Minister Narendra Modi’s visit to Myanmar thus comes at a very crucial period and comes with the objective of re-initiating an outreach towards one of India’s most ancient civilisational neighbours. It comes in the spirit of rediscovering and re-stating this deep understanding of each other in the current geo-political climate.

By focusing on the need to strengthen ASEAN, the prime minister is, in a sense, reconfiguring Win’s position articulated over six decades ago — that Myanmar remains most ideally suited to becoming the South East Asian carrefour of the future, a dynamic central point that not only facilitates linkages but also actively contributes to the growth and amalgamation of the region.

ASEAN is itself at the crossroads with attempts being made to weaken it; it is here that both India and Myanmar need to play a crucial role in stemming that effort and to further strengthen the body. Both can be important arbiters in chalking out and pushing through connectivity issues that are vital for the entire region and for India’s North East.

Modi’s reaching out to Myanmar and the ASEAN, in the spirit of ‘Act East’, therefore, signals the beginning of a realignment and shall breathe a fresh dose of energy and dynamism both into the ASEAN and East Asia Summit multilateral forums.

India was Burma’s primarily link to the wider world once and as the country is now opening up and regaining its balance and position in various multilateral forums and comity of nations, India needs to make dynamic and rapid outreaches to become that link once more instead of ceding space.

Contrary to shallow perceptions and reading, Myanmar has never looked to becoming a client state of some large regional power; on the contrary it has always displayed a strategic sense and a spirit of partnership.

Modi’s visit comes with the spirit of forging a long term civilisational partnership with Myanmar, it aims to look, to lay and cement not only physical connectivity but institutional and psychological connectivity — a dimension that has often been overlooked in the past but which shall assume greater centrality in the coming decades.

This visit is set to see the inauguration of an intense and more active engagement with Myanmar, driving the focus on the need for India to have a larger economic role in the region and to increase her ventures on to the life-line rivers of that country that are so crucial for regional connectivity and to increase in her cultural and educational outreach and partnership.

Win’s ‘arch of Bay Bengal’ is perhaps now ready to be stretched towards other horizons and dimensions, gradually transmuting into a circle that shall include within its contours most of South-East Asia and its many connecting seas and oceans — turning the area it into an interconnected zone of prosperity and growth.

Both India and Myanmar hold the potential and should look forward to drawing that new circle in the region. That they are ideally suited and poised to re-configure that ‘arch’ is what the prime minister’s visit signifies and symbolises.