ABOUT THE MESSAGE AND THE RECIPIENT This January 26 provided an interesting as well as reassuring image. The leader of the world’s largest democracy, a leader who once sold tea on a railway platform to passengers passing through his small town and who, working his way through the democratic process, rose to become the chief executive of his country was receiving the leader of the world’s leading democracy.

The moment was poignant and was a tribute to India’s civilisational spirit — a spirit which resisting strong efforts at periodic subversion has allowed and enabled a commoner, a man of the people, a ‘small-town’ boy and a constituent of the hoi-polloi, to rise up the ranks and to occupy that seat whose first occupant was an accented and erudite ‘Harrowian’.

Not only is such a rise, a reflection of the essential civilisationally democratic spirit of India, which has in reality survived because of the predominantly Hindu worldview and ethos, but is also a reflection of the ways and perceptions of the myriad socio-cultural and service organisations in whose ranks the leader once worked and was groomed. Unfortunately the unilateral discourse hitherto forced on the country — which is finally slackening and dissolving — never allowed a balanced assessment of these organisations and of their societal and national contribution.

It sufficed for a section to simply blackout the legacies and contributions of these organisation and their efforts for national regeneration, by talking of hidden agendas and of raising the spectre of a ‘fascist state’. In fact, whether he was aware of it or not, the American President was, in a sense, witnessing the spirit of the Indian Republic as it has been sustained, not so much by a system, but more by the ethos of the vast majority of this land despite adversities — both external and internal.

The American President was treated in the true Hindu spirit of treating guests. The Prime Minister himself took care of the details, was himself graciously present to receive the visiting dignitary and stood with great dignity till the American President’s car left the tarmac on arrival. It is these, apparently small gestures, which reflected the essential spirit of ‘Bharat’, a stark contrast to the usual Westernised way of doing and seeing things.

The aspiration of ushering in a tectonic shift in India-US relations, the urge to see this long stymied relationship rise to newer dimensions and evolve more intricate and fruitful strategies was palpable. Among the visions and statements that emerged out of the visit, from a civilisational-reach, perspective and strategy, the ‘Joint Strategic Vision for Asia-Pacific and Indian Ocean Region’, in a sense, recognised India’s legitimate aspirations for re-creating her civilisational space in the Asia-Pacific and beyond. The vision statement also recognised India’s role in the Indian Ocean region and accepted the area as her unique civilisational sphere where, for millennia, she has generated waves, controlled currents while pursuing her civilisational goals.

The strategic vision for this region referred to a new partnership while calling upon India to become pro-active from Africa to East Asia. Interestingly, the area or spheres that the document refers to, regions in which it sees India becoming active and generating multi-dimensional partnerships have been areas where Indian traders, artists, philosophers and exegetes were most active, in the past, having an unfettered liberté de circulation.

Mr Obama himself seemed to have well absorbed Indian viewpoints. His much talked about reference to Article 25 and to freedom of religious practice and public order in India was surely aimed at those overzealous soul-harvesting types who, by their vigorous and insidious religious interventionism in the last six decades, have only generated disaffection while disturbing public order in India. The United States Commission for International Religious Freedom too could perhaps absorb the President’s advice in the right spirit and prevent these public order disrupters from visiting India.  Mr Obama was absolutely right on Article 25; his message was meant for the other side. 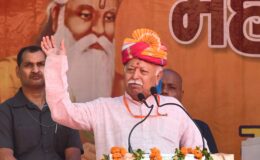