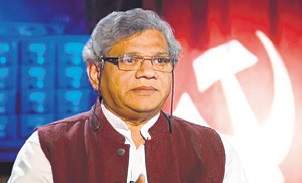 “The communist strategy is simple,” philosopher Ram Swarup wrote in his Communists under Communism (1955). “It consists in serial liquidation of ‘enemies’, constituted of all the non-communist opposition and the ‘non-proletarian’ sector of population. Blackmail, vilification, character assassination are the characteristic methods used to achieve this end.” ‘Enemies’ for communists have been those who have held opposing political views or have espoused, even intellectually, artistically and through literature, a world view which was diametrically opposite to the propaganda-induced utopia of communism. The method of physical liquidation has always been communists’ first preferred method for elimination of ‘enemies’, vilification, character assassination and the others have been applied where physical elimination has been difficult. The world’s history is littered with graveyards of those who became victims of communism because their politics was different.

Comrade Sitaram Yechury, who despite all his machinations with bourgeois parties could not get a third term in the Upper House, always speaks of Nazi Germany, Mussolini’s Italy, but remains dutifully silent on Stalin’s Russia, Pol Pot’s Cambodia, Mao’s China or for that matter, Pinarayi’s Kerala. Such references would open the dungeon lock to their own past. This past was seen in a limited manner in West Bengal between 1977 and 2011, when thousands of political workers belonging to other political parties were mowed down, eliminated and tortured—it is still seen in Kerala, where serial liquidation of ‘enemies’ (in this context BJP and RSS workers) continues unabated.

The murder of 34-year-old Rajesh, a Karyavah of RSS at Vasati, in Thiruvananthapuram last week, was the latest in this serial liquidation process. He had 40 stab wounds, his hands were chopped off and legs nearly severed. His only ‘mistake’ was he did not espouse the communist world view and had socially, culturally and ideologically pledged allegiance to Indian nationalism. Members of the #NotInMyName cartel and their vocal proponents and representatives in the national capital, across India and in TV studios have maintained a stoic silence. They feel Rajesh’s death doesn’t need a reaction, a statement, or a candlelight vigil because he was killed not in any of Narendra Modi’s BJP-ruled states, but in a state where their own ideological co-travellers rule. The question, therefore, that begs an answer: In whose name was Rajesh killed?

Swarup points out another dimension in the communists’ habit of resorting to violence. He talks of how the communists excel in ‘mutual liquidation’. Pointing at communist dispensations, he describes this mutual liquidation that communists have indulged in. Such a propensity for mutual liquidation only shows the abnormality and bestiality of the communists’ creed and of methods that it inspired. “The leaders of communism of the early and mid-twenties in all countries were removed (after the Bolshevik Revolution),” writes Swarup, adding, “Practically everyone belonging to the local politbureaus of 1920-27 were eliminated, in many cases by murder. In Russia itself, of 13 or 14 Politbureau members, except for Lenin and Stalin, all had been removed by 1940 by a state-assisted death. Of 71 members of the Central Committee of 1934, only 21 were to be found at the end of 1938. Thirty-six ‘disappeared’, nine were officially shot, one was assassinated, one committed suicide.”

The poisonous creed of communism still survives and corrodes the entrails of Indian democracy; it feeds on some of the ‘bourgeois’ parties, especially the Congress. Both these parties, therefore, including their intellectual drum-beaters, need to be politically liquidated for Indian democracy to regain its full health and vigour.