Ten children and two women — by conservative estimates — were bombed and burnt alive in retributive political violence in West Bengal’s Rampurhat, situated in the district of Birbhum. The dead belonged to a family whose men were local leaders of the Mamata Banerjee-led Trinamool Congress, the attackers too belonged to the TMC.

Vendetta politics and politics dominance and of control leading to violent clashes between increasingly belligerent and armed factions of the TMC is plaguing the whole of West Bengal. The state administration, the police, the administration at the grassroots have all been compromised or co-opted in this zero-sum game of violence and revenge. That West Bengal is being increasingly Talibanised is becoming evident with each passing. It is turning into a lawless hinterland which is run by a bunch of blood-baying political gang-men through fear and the barrel of the gun and the bomb.

In the last week, West Bengal has seen 26 political murders. Newly elected councillors were shot dead by their own partymen, elected councillors from the opposition party were killed, all this to prevent each other and to prevent them from assuming offices of chairman or vice-chairman of municipal corporations, all sinecures seen as offering scope to amass wealth from public funds. The BJP’s Member of Parliament from Ranaghat, in the district of Nadia, faced a bomb attack less than a week ago while he was returning from watching The Kashmir Files. He narrowly escaped.

One of the prime witnesses of the Rampurhat massacre, a minor who was admitted to a local hospital with burns, has been missing since last night. All these point to the complete co-option of the administration and the police. The men in uniform and the slogan-chanting cadres with the TMC’s political flag can hardly be distinguished in West Bengal today.

The entire official machinery, in Birbhum for instance, is toeing the political line and has been completely compromised. While the ordinary people of the state, with their opportunities shrinking, peace dissipating, insecurity setting in, are increasingly losing faith in the administration and the police.

During the campaign for the just concluded Assembly elections and even earlier Mamata Banerjee had raucously said that she did not want to turn Bengal into Uttar Pradesh and that the BJP’s Uttar Pradesh was a failed model. The irony is that while the BJP’s government in Uttar Pradesh, in the last five years, has successfully transformed the law-and-order climate in the state, Mamata Banerjee’s TMC government has completely ruined the law-and-order situation in the state. 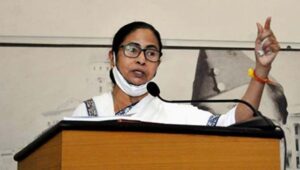 One of West Bengal’s greatest challenges today is that of lawlessness and a complete inability of law-enforcing agencies to contain political violence, political hooliganism and political levy-lifting and syndicatism. Having come to power the third time, the TMC’s arrogance, reflected in Banerjee’s own utterances and posturing, is leading to the unravelling of her party. The TMC is breaking up into local and district factions, with each faction working with daggers drawn at each other and the TMC’s state leadership unable to and in many cases unwilling to — because these factions owe allegiance to various state leaders — initiate any effort at controlling or reigning them in.

In the Rampurhat massacre, the local police did not make any attempt to prevent the diabolic massacre, while the TMC’s district leadership, led by its president, known for his abetment to violence and for his open threat and his penchant for perpetrating violent politics, tried to pass of the torching of houses as having occurred due to an electoral short-circuit. The West Bengal DGP was quick to say, even before the investigation had taken off, that the clashes leading to death were not political in nature. In fact, a few minutes later, this was also the line taken the TMC’s official spokesperson, Mamata Banerjee’s current lieutenant, minister Firhad Hakim reached the spot of the massacre, held a press conference, alleged, in a dramatic manner, that it was a national ‘conspiracy’ to defame West Bengal — all this even before the forensic team could reach the spot!

Birbhum is one of the most volatile and violent districts in West Bengal, the TCM’s violent writ runs across it; in 2018, over 80 percent of the panchayat seats were won uncontested by the TMC, large number of illegal arm and explosive factories are run from the district, all under the control of the district’s TMC leadership.

In the last decade the district has become more violent with a number of TMC factions playing against each other; a large network of smuggling cartels, abetted by the TMC, and protected by the district police, has thrived with impunity. The Rampurhat massacre is a result of that living with impunity, when the fear of being punished by the law enforces vanishes, when political clout and control is determined by how much ill-gotten resources once can control and when the entire official system genuflects to political diktat.

What happened in Rampurhat, was mass killing. It reminds one of the mass massacres of hapless Hindu Dalit refugees in Marichjhapi in 1979, carried out the by CPM-led Left Front government of Jyoti Basu. It also brings to mind the “Bijon Setu Massacre”, the burning of 16 Ananda Margi monks in the streets of Kolkata in broad daylight by CPM hoodlums in 1982.

The TMC leadership and Mamata Banerjee herself have been yelling from the rooftops that West Bengal under them is presenting a ‘new’ model of development, which shall be the “future” of India. It has become evident to all that such a satanic model needs to be resisted and exposed collectively so that no other state has to face what West Bengal is facing today. Mamata Banerjee is asked no question by a section of the co-opted secular press and intellectuals. Their questions are always reserved for the BJP and BJP-ruled states. Since they ask no question of her, and are dishonest in their stance, she continues to hack away at whatever is left of West Bengal’s democratic fabric.

Five decades since the communists came to power and a decade since the TMC has come to power, West Bengal’s night seems to be long and without end. The Rampurhat massacre is just one more epitaph in democracy’s slow death in the state.