Srinagar, June 23: Bharatiya Janata Party (BJP) Thursday said that only the majority community in J&K can end the pain of Kashmiri Pandits who are being selectively targeted by militants.

Speaking on the sidelines of the function commemorating the death anniversary of Dr Shyama Prasad Mukherjee in Tagore Hall, Srinagar, the BJP General Secretary (Organization) Ashok Koul said that Kashmir has witnessed selective killings by militants from the last few months that vindicates the militant organizations that have changed their designs.

“This methodology proves militants have changed their modus operandi and thereby have resorted to selective killings,” he said.

The BJP leader added that those working for national interest are the prime targets of militants and there is no discrimination of caste, color, creed or religion.

To a query about the to-be held assembly election in J&K, Koul said that the BJP is always ready for polls. “Whenever Election Commission announces the polls, you will find BJP always ready,” he added.

Speaking on the occasion Director, Dr. Syama Prasad Mukerjee Research Foundation, Anirban Gangulay, said the party has reached its peak due to the dedication and that is why the BJP is dyed in the color of patriotism. He said BJP is committed to struggle and sacrifice for the cause of the nation while as other parties ditched the people of J&K for their vested interests.

“Our leaders sacrificed their lives to safeguard this part of India. Today we pay respect to all those who rendered their lives,” Ganguly said.

Ashish Sood, co-incharge J&K said that wherever we find us today is the result of the sacrifice and hard work of workers .There are many political parties but only we can claim to be an organization based party, he claimed.

“We are in existence due to our workers. It’s not a simple event that four generations work in making a party and it continues to function. I salute those workers, all the four generations, which sacrificed them for building the BJP”, he said. 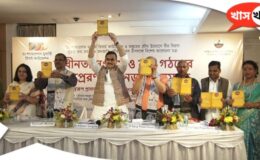