New Delhi, December 3, 2021; Under constant attack from terrorism, unrest on national borders, changing global dynamics and volatile situation of India’s neighbourhood, defence of the country has become a priority of Modi 2.0 government. Pentagon Press (leading Indian publication house dedicated to highlighting national issues) has launched the book ‘Modi 2.0 A Resolve to Secure India’ at the perfect time, as the debate is alive on the national security strategy of the current government. Voices both in favour and in criticism are strong on domestic and international political circuits.

‘Modi 2.0 A Resolve to Secure India’ captures noteworthy opinions and inputs of national security experts and thought leaders on the overall performance and strategies of the Modi government.

At the book launch Shri B. L. Santhosh, National General Secretary (Organisation), BJP said, “Today is a very special day for all of us. In the same building a book is being launched on a disaster that was and a disaster management that is this government. What adds value to this book is the immense accomplishment of the contributors and editors. In modern times the sense of assurance was diminishing, these 7 years have brought that sense of assurance in the leader and the system. The potential that was not realised in 70-75 years has been unleashed in 7 years.

Today I am reminded by the words of our PM – I don’t know what I can achieve or deliver in the next 5 years, because achievement requires support and effort of many people. But I can assure you that I will work in a way that none of you will have to bend your head while asking for votes next time. He made us proud.

This government’s achievement is not policies, they were there already. The achievement is the change of mindset brought by this leader – Nation First.”

Prof. Bibek Debroy, Chairman, Advisory Council to the Prime Minister, said ”A sound and aggressive defence strategy is an absolutely necessary part of India’s reform agenda. Strategies to counter insurgency on our national borders and police reform are essential for maintaining the momentum in development.”

Shri Ranjit Panchanda, Former Director General, Indo-Tebetan Border Police said, “The Modi Government believes in keeping every citizen, who is an equal stakeholder in national security, secure from all kinds of threats, both external and internal.” 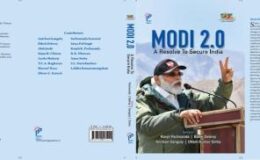