A tale of two parties: How BJP’s win saw peace and amity, but Mamata’s victory led to violence and anarchy It is about 96 hours that the Assembly election results were declared, giving the Bharatiya Janata Party (BJP) a decisive mandate in four states and yet not a single incident of political violence, harassment of political opponent, political killing and retribution has been reported from any of these election-going states. BJP workers and leaders have rejoiced and celebrated, the only riot was the riot of colours and of drum beats. The attitude and behaviour of the party’s cadre and the rank and file, post victory, have clearly shown that the BJP is essentially and fundamentally the only democratic political structure and movement in India today and is driven by established, defined and unmatched democratic norms.

Contrast this with the post-result days in West Bengal in May 2021 when the Mamata Banerjee-led Trinamool Congress came to power. For weeks and months on end, the TMC’s armed ‘harmads’ (political rioters) ran riot, targeting Opposition workers, especially the BJP’s cadre and supporters. Banerjee ran an extremely raucous and personalised campaign abusing Prime Minister Narendra Modi and Union Home Minister Amit Shah, and inciting people to commit arson and violence, if the TMC won. She abused the Election Commission of India, the CEC and other members, openly accusing them of bias and of acting like an appendage to the BJP. She called the prime minister an ‘outsider’ in West Bengal and described the BJP as a party of ‘outsiders’. Contrast this with her campaign in Goa, for instance. No Goan called her an ‘outsider’ in Goa. Unlike her party sheltered stone-pelters in West Bengal who had stoned BJP national president JP Nadda’s convoy, the people of Goa did not protest against her, while the people of Uttar Pradesh, simply chanted slogans and asked her to ‘go back’.

The people of Goa, where Mamata Banerjee had gone campaigning, temple hopping and initiated a TMC-joining spree, heard her out, examined the alternative to the BJP she was proposing, found it unappealing and hollow and rejected her and her party lock, stock and barrel. They were determined to prevent the percolation of the TMC’s violent model in Goa and decided to stick with the BJP which has consistently proved its credentials as a democratic and pro-governance alternative to the Congress and the TMC.

The puerile but intimidating slogan of ‘Khela Haabe’, repeatedly yelled out by Mamata Banerjee came a cropper in the elections. On the people of Goa, it had zero effect. Unlike Mamata, not everyone believes that ‘khela’ is a serious democratic alternative to good governance, stability and accountability! Whether it was Manipur, Goa, Uttarakhand or, for argument’s sake, Uttar Pradesh, the TMC was not even considered as the thirtieth alternative to the BJP.

Mamata Banerjee’s behaviour in the streets of Varanasi, a fortnight ago, and the manner in which she took to the street to howl at protestors who were chanting “Jai Sri Ram” and asking her to go back, her expressions of anger and of being shaken clearly exposed a frustration that comes with the realisation that the BJP was about to win a resounding democratic mandate. That she does understand India outside West Bengal and is beginning to also understand West Bengal less and less has been evident in the manner in which she has been conducting herself and her party during these elections.

Her high decibel and expletive-driven campaign during the Assembly election campaign had its corollary, in the immediate aftermath of the results. The evening of 2 May saw mayhem across West Bengal. Thousands of BJP supporters and their families were targeted, women abused and molested, BJP workers killed and made homeless and stateless, their houses and shops were burnt, and many of them were knifed and bludgeoned to death. Hitler’s brown-shirts would have perhaps paled in comparison. These acts of retributory violence continued for weeks.

Mamata Banerjee took oath on 5 May and she made no attempt to control any of these. Brazenly shirking any responsibility, she had the temerity to term this calculated, pre-mediated and systematic violence by her party workers and leaders, as ‘fake news’. Instead of trying to control her violent minions, Banerjee continued to deny the existence of the violence, spoke provocatively and termed it a ‘conspiracy’ to malign her and her party’s mandate. Neither did she act in trying to douse the fire, nor did she direct her ministers to visit the affected areas and bring about a peace. Till date she has not had the grace or the gumption to visit the affected families, to ensure that they receive compensation and the perpetrators of violence are brought to book.

In fact, it is a flawed model which compares Mamata Banerjee to Narendra Modi. There is and can be no comparison. Modi with his vast and phenomenal feat of dynamically holding an elected office for over two decades cannot be examined and assessed under the same rubric with an administratively mediocre, politically rapacious, temperamental, violence prone, retribution addict, intolerance afflicted Mamata Banerjee.

Mamata Banerjee’s only and perhaps her singular success is that, while the rest of India is gradually graduating towards the good governance and performance paradigm under pressure from Modi’s consistent adherence to these, she has kept alive and has consistently stuck to the politics of extremism. She comes across as an atrophied and incorrigible proponent of this extremist politics. Some deracinate and politically naïve intellectuals and assessors, have heaped on her the distinction of having put paid to extremist politics! In victory she is violent and in defeat she is bitter.

Prime Minister Modi, besides being the pre-eminent driving force and pole of the movement that is the BJP, continues to be the quintessential ‘karyakarta’ as well. He joined the victory celebrations, and in a historic victory speech, referred to the historic mandate as the mandate for ‘Amrit Kaal’, setting the agenda and imparting the orientation of how this mandate needed to be nurtured and directed. Anchoring the emotions of the rank and file, he brought out the essence of this victory. He spoke of the need for the government to be pro-poor, pro-active and delivery-oriented, besides focusing on good governance. He repeatedly spoke of development, housing, rations, infrastructure and expressed his deep worry of Indian politics being in the grip of dynastism. In victory, Modi described how this was a defining mandate which would shape India in the ‘Amrit Kaal.’ Victory, for him, is not only an elixir for the rank and file, but is also a state which must radiate hope in voters that their aspirations will see further fruition and fulfilment. 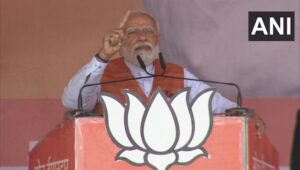 Such is the aftermath that follows the BJP’s electoral victories, the workers being imparted a direction on how to work on the mandate, and joyous celebrations with the party’s political opponents resting assured that they will not be victimised for their political choices. The results of 10 March and its aftermath have been no exception to that cardinal political rule adhered to by the BJP.